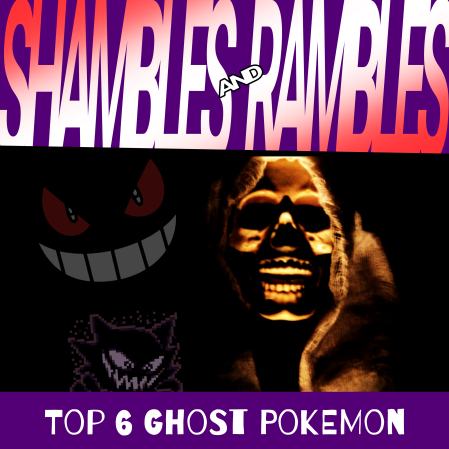 After a long and tedious wait, the newest episode of Shambles and Rambles is finally out!

In this episode, we start the beginning of an “inner” series of the podcast itself by picking our favorites among each of the eighteen known typings of the pocket monsters simply known as “Pokémon”. eventually we’ll get through all the types over the span of this podcast, but for now we’ll look at ghost types.
This episode is also a bit unfocused due to the super long delay and preparation to make this episode happen, so apologies for the mess you are about to hear. Just remember though: it’s called “Shambles and Rambles” for a reason…
Music: Lavender Town original (Japanese) theme – Pokémon Red/Blue versions.

Newest episode for ya guys, with another coming next Monday. In this episode, Taylor tags along as we discuss what our ideal video games would be if we were to become game developers. We also into tangents about a children’s book, Beast Wars, and pets.

END_OF_DOCUMENT_TOKEN_TO_BE_REPLACED

Surprise! First Episode of Shambles and Rambles is Now Available! Next Episode on Monday…

Shambles and Rambles: 2020 Movies, Games, and Consoles is now available! Take a listen by following the link: R&S Episode

END_OF_DOCUMENT_TOKEN_TO_BE_REPLACED

Hello Everyone! I has been a long while since I’ve done any posts or updates. Reason? Well it’s because my computer decided to go and kill itself! Thankfully this was right after I finished college assignments for my final class, but it unfortunately made me permanently silent from the online world for some time. But I am back to not only make my presence reknown, but to also announce something that is coming very soon!

Shambles and Rambles is a personal series made by me where each episode is unique and special in its own right. There will always be a different topic and discussion in each one that is randomly decided upon prior to the recording session, and as the title suggests we eventually derail into our own little “tangents” and rants regarding… Well whatever comes to mind at that point. You could argue that the series at times is intended to be out of hand.

The series will mainly star myself, Tom or “Topple/Toppletomr”, as well as Alex “Salt” Sherman. Occassional episodes will also star other individuals whenever available, including the likes of our members Taylor, Geoff, and pretty much anyone else who wants to be a part of a particular discussion via request, permission, etc.

The series is also intended to be available for all sorts of people, meaning that it is very much designed to be family-friendly to a degree (which is certainly different from the main GeekBeerz Podcast, which is filled with language and raunchy topics).

Hope Y’all enjoy the entertaining nonsense when it releases!