Pokemon Sword And Shield: All The New Hotness!

Hello everyone! I’m excited to return to talking about Pokemon yet again!

With the very recently released Nintendo direct, all about the new entry Pokemon games, we have been given a butt-load of new info regarding what to expect in these Nintendo Switch titles including gyms, the new gimmick, legendaries, and of course other new Pokemon! Let us dive in!

SO POKEMON ARE KAIJU NOW! AND POKEMON RAID BOSS BATTLES ARE A THING!

So the new gimmick for these new games has finally been revealed! Honestly everybody was way off on their hunches of what the gimmick was gonna be, with many people very much on board with the armored evolution idea. But we can say with absolute guarantee that nobody, NOBODY, was expecting Pokemon to grow giant!

The new gimmick, known as “Dynamax”-ing, is a new ability where you can make one of your Pokemon grow into gigantic size, via a digital projection of some sort. It is said to only last for up to three turns, but your Pokemon will be able to cause some major damage to the opponent during this time. This also contributes to a new raid system where up to four players can battle random Dynamax Pokemon boss battles. During this system only one of the four players can have a Pokemon Dynamax, so players will have to decide among one another in order to defeat the boss encounter. Also, the Dynamax’d Pokemon boss in the raid will stay gigantic for the whole fight.

Also, did I forget to mention the Pokeballs also grow? What crazy times we live in!

We can happily confirm that this new region in the Pokemon world will be the first game in the main series to act as an Open-world experience! The vast open wild areas of the games rather large region of Galar, known simply as the “wild areas” funny enough, are large open grasslands, deserts, and plains where you can explore in order to find Pokemon and items. This allows you to control your camera in order to explore your surroundings and the types of Pokemon you find will depend on either time of day, weather, and even what Pokemon you defeat in Dynamax raid battles!

This is by far the most exciting aspect in my personal opinion. There has been a desire for an open-world Pokemon game for years and we’re finally getting it!

GYMS ARE BACK WITH A FORCE! 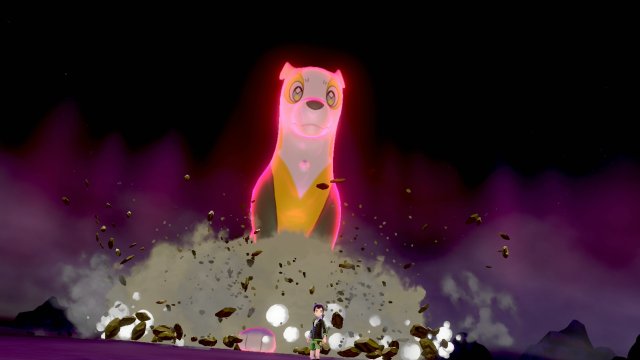 After taking a leave of absence from the Alola region, the concept of gyms are finally back in a very big way in the Galar region! Now gyms are large stadiums filled with a massive count of audience attendees anticipating your battle to come. These stadiums are designed specifically to allow Dynamax Pokemon to come into play. Your character even dresses up for the occasion so you know this is a big deal in Galar!

It’s great to see that gyms are still a thing, as well as seeing them as more inportant this time around (not that they haven’t been before..).

NEW CHARACTERS, INCLUDING THE NEW PROFESSOR AND REGION CHAMPION!

First of all, we have to introduce Leon, the region champion that has apparently never lost a battle. He is popular among the crowd due to his charisma and skill. We can also confirm that he at least has a Charizard on his team. Alongside him we must introduce Hop, his younger brother who acts as your rival. Hop hopes to become as great as his older brother, which means he is gonna fight you countless times just like a proper rival should!

Next we have the new Professor! Known as Professor Magnolia, she is an older woman that is researching the whole Dynamaxing phenomena. She is not alone though, for she is accompanied by her granddaughter Sonia, who acts as her assistant as well as another aid to your adventure before you. Also, she was childhood friends with Leon which is worth mentioning.

Now look, I have never directly disliked or despised a Pokemon to the point of absolutely denial of their existence. Sure there are some I like less than others, and some that definitely annoy me, but I don’t discard them as being pointless or completely stupid.

I say of of this in order to make people realize how insane it seems to admit that these newly introduced Pokemon so far are easily the most pure and aesthetically pleasing designs I’ve seen for this game series since probably the third generation! There is just something about the way they are implemented into this world and not overly designed that just makes them so uplifting in a way I never thought was possible anymore. 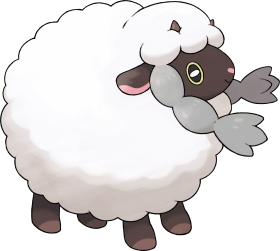 So to start off, the first new Pokemon introduced is Wooloo. Wooloo is a new Normal type sheep Pokemon that is said to be highly sought after for its wool in order to design new clothes and such. It wouldn’t be surprising if this played in further to how you’ll customize your characters. 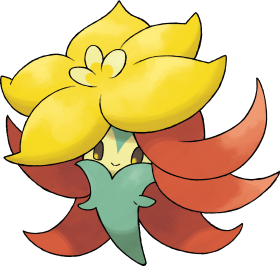 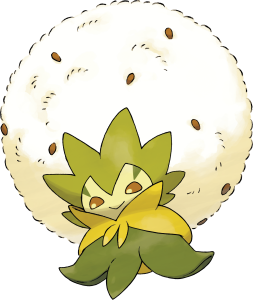 Next is Gossifleur, and its evolution Eldegoss. These new Grass type Pokemon are some of the most uniquely designed flower-based Pokemon with self-defining silhouettes as well as noticeable attributes such as the large afro-style cotton head on Eldegoss. The seeds in Eldegoss’s cotton is said to be highly nutritious and beneficial to both Pokemon and humans. 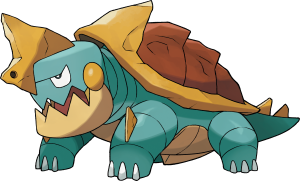 Then we have the awesome snapping turtle thing known as Drednaw, and Rock/Water type Pokemon that is said to be incredibly vicious and powerful, which in return makes it difficult to train for newbies. 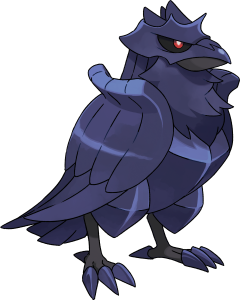 And lastly one of my already all-time favorite Pokemon ever, the new raven Pokemon known as Corviknight . Not only is does this new Flying/Steel type bird come with one of the sickest names to date, but it also comes packaged with a great design! This seven foot tall, nearly all dark purple predatory fowl is said to be the most powerful threat in the Galar region skies. Some even act as transports that’ll take trainers and others to various locations throughout Galar which confirms the return of Pokemon that negate the use of HM’s. The less HM’s we have the better I say!

This new Pokemon bird is so cool and so interesting to me that I hope with outlandish expectations that is is somehow related to Skarmory either by evolution or lore!

The legendaries are finally revealed, and nearly everyone was right about both of them being wolves which wasn’t too difficult thanks to the logos. The one that dons the cover of Pokemon Sword is known as Zacian, which instantly reminds one of the great wolf Sif from Dark Souls thanks to how this Pokemon holds its literally sword weapon! The second legendary that dons the Pokemon Shield cover is known as Zamazenta. This wolf adorns a shield looking armor around its head and forepaws. Both of them are very similar in their wolf anatomy, with their weapons and other minor tweaks being the only variables that makes them two separate Pokemon. So I’m glad to know that my outlandish theory a while back was actually outlandish.

Now it’s a certainty that these Pokemon will still have some sort of reveal later on, with such things as fusion coming to mind. But we’ll have to wait to see more information regarding these legends…

We can finally say that these new games will be released on November 15th 2019, and that even a bundle with both versions is now available to pre-order!

So what other surprises are in store for these games? While we got plenty of information today there is still plenty to discover and ponder. Are the rumored Galar forms for older Pokemon still true? Will there actually be a new type added? We’ll have to wait, but nevertheless we will be spoiled in abundance with this new info for some time.

Hope you enjoyed, I wrote this fast so it may come off as poor and half-complete ramblings. But can you blame me? I’m excited for Pokemon! Anyways, until the next set of Poke-news…