Outlandish Prediction: The Rockruff Evolution Line Is A Precursor To The Sword And Shield Legendaries…

Hello everyone, I am back again with more Pokemon! More specifically, I’m back with one very outlandish prediction and personal theory. I believe the title says it all so please continue reading for a further explanation in context…

So to quickly clarify, I do not know at all if someone else out there has thought of the same idea. It would be absolute coincidence if that were the case and, in all honesty, really awesome if I wasn’t the only one who thought of this idea!

As Pokemon fans know, the upcoming games of Pokemon Sword and Pokemon Shield are the next Gen titles that will likely release around November of this year. The reqion of Galar is inspired by the UK and that means the titles and new Pokemon will properly represent that fact.

As of the writing of this post, only the starters have been revealed and the looks of the Legendary Pokemon remain a mystery. Despite this, there are some clues and throeries suggesting what these Legends may look like. One such clue is staring us directly in the forefront. 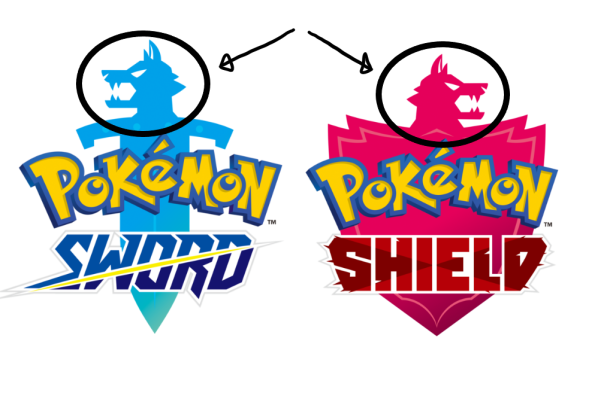 The logos for the new games represent the respective silhouettes of the namesakes, however they also distribute an odd inclusion in the form of wolf-like heads on top of both symbols. Both are identical but they also face opposite ends. For those who didn’t know the logos for previous games, at least the Japanese ones, always included something extra to give us a clue to what the gimmick of the game may bring. For X and Y it was the symbol for mega evolutions, for Sun and Moon it was the symbol for Z-moves, and even the Japanese logo for Sword and Shield includes a still unknown symbol that may have to relate to a sporting-based gimmick. However we also have these wolf heads which is still incredibly odd… Unless it’s our first proper clue to the Legendaries or even “Legendary”.

Indeed, when a new game shrouded in mystery comes about there are countless “leaks” and rumors associated. These should always be taken with a grain of salt but sometimes these claims can be somewhat credible as well as believable. One such claim out there says that the box art Legends are actually the same Legendary to two different forms, the “Sword” form and the “Shield” form. It also states that one will be Steel/Rock typing while the other will be Steel/Fighting. I could not find the direct source to the claims made by this particular rumor, but here is another source that talks about the wolves and the typings as well as some other theories which you can read HERE.

Now it may seem weird to have the same wolf Legend in different forms on each box art, but also consider the fact that the Sun and Moon games also had the Legendaries related in an evolution chain, which is still weird to this day! So anything is absolutely possible at this point.

Now then, why do I bring up Rockruff and its evolution chain into all of this? Well I have a deep suspicion that, if these rumors turn our to be true, that this Pokemon was the precursor to what will inevitably become the idea for the next Legendaries, perhaps even the Legendary trio.

Rockruff was a Pokemon that was obtainable fairly early on in the Sun and Moon games. It was an adorable Rock type puppy that acts as a sort of companion pooch similar to that of real life loyal dogs. It is considered a friendly starter companion for new trainers that will eventually gain a tougher attitude as it grows up. Now Rockruff is not what I’m solely considering as the main suspect of influence for the next Legendaries, rather it’s the evolution gimmick of this Pokemon that I’m considering into this little theory of mine.

Now Rockruff technically evolves into the same Pokemon, but that Pokemon can be completely different looking depending on game version as well as time of day in the games. In general, Rockruff will evolve into a Lycanroc at level 25 no matter which version you have. In Sun and Ultra Sun this Lycanroc is considered the “Midday form” and looks like proper evolutionary expectation for this pup as it’s basically a big wolf. In Moon and Ultra Moon this version of Lycanroc is considered the “Midnight form” and looks more like a werewolf monster with red fur. And a third unique form, that was obtainable through an event, is considered the “Dusk form”. This form was available in either version so long as your Rockruff had “Own Tempo” ability, and it evolved between the time of 5:00 pm and 5:59 pm in-game. This Lycanroc was similar to the “Midday form” except that it had orange fur, green eyes, and a larger mane.

In all honestly this sort of seemed like a pointless gimmick to associate to some random Pokemon that had no real footwork on the overarching story of the Sun and Moon games, even if it was a cool thing to associate with a highly likeable Pokemon. But what if this was a hidden teaser for something bigger all this time? What if we got our first tease for future Legendary Pokemon without ever realizing it?

It is my assumption that the box art Legendaries WILL be the same wolf creature. Perhaps they will also evolve from a baby form that is similar to Rockruff too. Both will have different forms and type combinations and the story will slightly emote different ideologies depending on version. I would say the Sword version will be the Steel/Fighting type one that is humanoid somewhat and perhaps carries a sword-like weapon or claws that act as its swords, this Pokemon would very much be like Midnight form Lycanroc. The other version would be the Steel/Rock typing that is perhaps a modern wolf design with armor-like structure surrounding its body (which could also help sell the idea of “Armored evolution”), this one would be more like the Midday form Lycanroc.

Here is fan art I found on the net that helps sell my idea a bit more, kudos to the person responsible for making these fantastic designs!: And lastly, why bring up the Dusk form of Lycanroc at all? This version does seem like a random third version that was created just for fun… or was it?

We are all used to there being a third Legendary that either correlates with the main Legends or actually becomes the biggest player in their stories. Most popular “third” Legends include Rayquaza, Giratina, and Zygarde. So another theory I have is that there will also be a third wolf Legendary (technically a second one since the main ones will likely be the same in two modes) that will also be associated into the main plot as well. Hell, it could also be a secret third form of the prime wolf Legend as well.

Again, this is just an outlandish prediction that will likely be untrue. Did you enjoy the read? Does this ridiculous theory hold any ground? Regardless I hope you guys enjoyed the read! I am very excited for these new games and I can’t wait to see what the new Legendaries will actually be. Until next time…

P.S.: please keep in mind of when this was written, I have a suspicion that someone will come across this later in when many things are already revealed and comment about how wrong I am when it no longer really matters. So for future readers, let’s not try to be dum-dums ok?