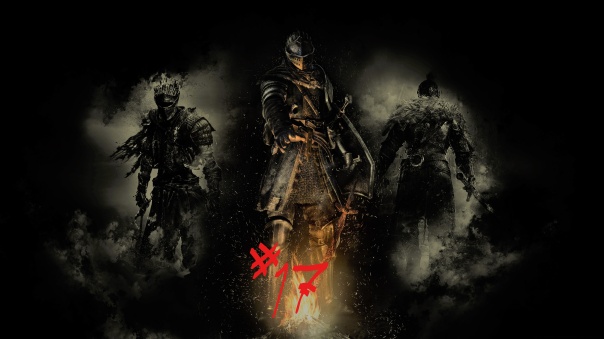 Hello again, another post and another entry. You know what to do…

Description: Many might be more aware of this enemy being known as “the Mirror Knight”, as he was called from the Dark Souls II beta. He is a big armored warrior is very shiny metal, wielding a large sword and a shield which looks like a large oval mirror.

The Looking Glass Knight is a human type enemy that, from a point of view, is very much a basic and standard boss fight. His attacks are mainly frontwards and are the usually standard striking, sweeping, overhead swinging and lunging attacks despite being used often. He does also have the ability to hit you with lightning blasts and even electrify his sword though, which may seem like the only brilliance this enemy has to offer. But the real glory of this boss comes from his main unique ability.

With his mirror-like shield he can actually summon another enemy to aid him in battle, more specifically he can summon an NPC character. Now the NPC character on his/her own merits can be fairly tough to beat alongside multitasking with fighting the Knight boss as well. And the toughness of fighting two enemies at once can be hard to beat as well. But what if that NPC character was actually another real player that was summoned? Well if you play online (which why would you not be? just an opinion) the boss will indeed summon a real player into your world to fight you. Now there is a slim chance that this real player will be easily dealt with, but it is also likely that the player will be a huge threat to you much like an Invader would be, making the fight highly potential to be one of the hardest.It may be obvious now that it is technically the online version of this fight that is chosen for this list, but you must admit to how unique and special this type of fight is.

And thus, the Looking Glass Knight is our choice for number seventeen.

Check back again in a few days for the next entry of our list!