GBHorror2017: How Skeletons Are “THE” Horror Icons

And yet another Halloween post has appeared to bless your day with spooks and creeps. Today we will be igniting appreciation for what can only be described as an icon of the horror community. This is not a particular character or creature as you might expect, or even an ancient fable of old. This icon goes way back and possibly before the conceived concept of “fear” ever terrorized us. It is something that is within literally all of us human beings: the skeleton. Now skeletons occasionally appear in the media such as film or video games, but I believe they don’t get the right amount of appreciation they deserve, even f the image itself is heavily integrated within our horror community. Here, we will give a few reasons to why the skeleton will forever be the most iconic symbolism of horror and horror concepts. 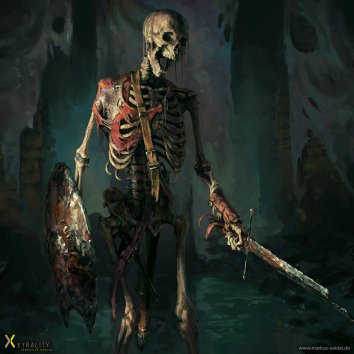 First and foremost, Skeletons are us. And what I mean by that is the fact that we all have a skeleton within our bodies. That is why the word skeleton derives from the greek word meaning “dried up”.

Whether we are male or female, caucasian or african american, disabled or mentally handicapped, we are all still the same human beings which means we all have the same functions in our bodies, the most important part of the body besides the heart and brain would have to be the skeleton. Without our marrow-filled bones to shape our bodies and move them about with joints and hinges, we would be nothing but piles of fleshy globs with no way of traveling about. Perhaps this is why the skeleton is used profoundly as a sign of death or as an empty husk of who was once a living being during cinematic scenes of distress or eerie. it is a sign of something left over of a person with characteristics and personality, which has become nothing more than useless matter. Even seeing a moment, whether film or game, where an individual gets their face ripped off to reveal the skull beneath is both terrifying and unnerving, it is moments like those that remind of what we truly look like underneath the skin and muscle, a relief that we all have a form of uniqueness and beauty over our horrid boned faces.

Perhaps what has been said so far can be seen as a lead in to why possibly some superstitions have come about. Even though skeletons are hollow shells of former life, they are still the remains of humans. Justly, it is proper ritual to bury the bodies in a well-mannered prospect, given it be religiously or not. These burials are mostly the reasons of respect and mourning of the dead, but many beliefs claim that the dead will haunt you, or even murder you in some cases, if the remains are not buried or given an honorable ceremony. This superstition can go down in two ways, either the spirit of the individual will torment the uncaring person until he or she gives in the haunts and disposes of the body properly, or the remains of the person will rise from the dead and attack you in some way. This means that either the skeleton itself should be respected and a funeral should seal its eternal peace or else be bothered by a vengeful spirit, or that you should fear the skeleton attacking you and therefore lock it away.

So at this point we’ve just rambled about the possibilities of why we are intrigued by the skeleton, and why skeletons might have been significant to the people of past cultures. But why is the skeleton still around as a customary component to horror today?

From what can be determined by how we interpret the skeleton in modern day, we have seen to depictions of the skeleton. The skeleton has either been a subject of comedy or as a visual of horror as expected. Perhaps it is seen as a comedic prop due to how the idea of a skeletal humanoid falling apart or reconstructing its body into new things is amusing and funny? Whatever the case we’ll just be sticking to the horror aspect for the means of this post.

Death is most strongly displayed if images and symbolism of skeletons, or skulls in other cases, are displayed forefront and proud. This is why something as symbolic as the the grim reaper is usually depicted as a skeletal figure with a black cloak, scythe, hourglass, and occasional black crippled feathered wings. The depiction of the afterlife, in this case the fact that the reaper is a fallen angel, and the imminent fear of death is exposed nicely within the reaper because he can dual display the religion card as well as the eventual condition of a mortal body. For more reasons to explain the true fear that commences from the skeleton, why do you think the catacombs are famous for being terrifying? Sure there is the facts that it’s a cave underground that is also a labyrinth in nature, but the fact that skulls upon skulls and bones succumb to the walls of the interior simply amplify the popularity ten times. Skeletons are still used in more modern monsters in the media as well. Whenever you see an enemy in a video that resembles death, or a ghost in a film that is trying to rectify that idea of mortal death, there will always be some sort of inspiration in design coming from the skeleton. Once again all we’re attempting to say is that the skeleton is a huge influence in popular culture and honestly can you blame them for using a widely known image for advertising? Here are a few examples of characters or logos used from companies that resemble skeleton-like features: 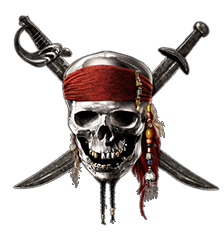 the Grim Reaper (obviously), used in a number of prints, film, and games

To this day, the skeleton is a widely renown statement for the symbol of death and the paranormal. And we are more than glad for the influence of this classic horror icon. Also, they are fun Halloween props too.

Thanks to anyone who read this and also thought it was good somehow. I am writing this very late at night and my mind is fried. Check back tomorrow at 1 pm for yet another Halloween post!

Posted on October 5, 2017, in Uncategorized. Bookmark the permalink. Leave a comment.