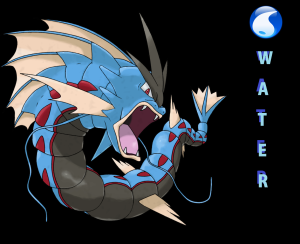 I am keeping my promise and continuing these top 6 Pokemon type countdowns. Next up is water type.

Now there are plenty of different types and varieties when it comes to these pocket monsters, but water easily has the most Pokemon under its roster. This means that there are a lot of them to see with only six for use to choose from. It was hard but I’m pretty sure some will agree with what we have.

1. our “type” top 6’s will NOT include any starters or legendaries. This is due to those specific Pokemon being obvious choices, we will use them for certain top 6’s in the future

2. this list will mostly go by personal favorites either by childhood nostalgia or from which ones we liked from the games. However some stats, abilities, etc. could be mentioned here or there.

3. This list is a bit PERSONAL to either the post writer or all of GeekBeerz,do not be in any way mad if your favorite didn’t make the list or whatever. In short: Don’t overreact bro, this is just for fun!

4. This list isn’t in any “best or worst” lineup, and one isn’t necessarily better or worse over another, they are all equally fair in these lists

The dragon that actually wasn’t really.

How in the hell do you NOT put Gyarados on a water type list? He was literally the original water monster, and also the original largest water Pokemon (until others like Wailord came to town). Gyarados is pretty much a staple character to the series, much like Charizard and Pikachu, and to a lot of fans he is something quite special.

Nothing will torment those special moments for original fans. Remember when we came across the infamous red Gyarados in Gold and Silver, that was basically the first lead in we had for shinies? Remember how good you felt after evolving that stupid worthless fish into an aquatic beast? Good times man… Good times. On top of all that, he can also become a massive powerhouse for your dream team.

His mega form is also very cool. It looks as though it took some elements from its pre-evolution, Magikarp, and applied it to its already impressive form. The only odd thing about it is its Water/Dark typing. Why is it Water and Dark? But then again his original form is Water/Flying so why cant it learn fly?

Now in the original generation of Pokemon, there were definitely some killer looking Pokemon but others were just ok to meh. When generation two came along, it decided to take a few of those whatevers and give them awesome new evolutions, even to Pokemon we didn’t think need them. This includes Seadra, who was a great looking creature but could’ve used more aweso… BAM! Your Seadra is now a Kingdra!

So we’re assuming that Kingdra is mostly designed to be a more simple form of a seaweed dragon? A very real species of seahorse (I believe they expanded on this idea with Dragalge). This design also works because it gives off a very real king-like stature without some gimmicky thing like a crown or sceptor.

Whatever floats your weasel…

Personally my least favorite generation was certainly generation four. It wasn’t entirely bad due to awesome starters and legendaries and such, but there were some underwhelming looking Pokemon, again personal opinion. However I’ve slowly come to enjoy Floatzel quite a bit.

Originally, hated his look in the Diamond and Pearl games. I just thought he was an overpowered looking Buizel, but not in a good way. However I decided to use one on my team for a while and this particular one was actually pretty dang useful. I would eventually use this weasel to aqua jet and hydro pump my enemies aside until I finally made it to the elite four. Ever since then it has become a favorable Pokemon. Even better, I found out that other members here are also fond of the guy.

So yeah, weasels are pretty awesome now. especially if they can swim. 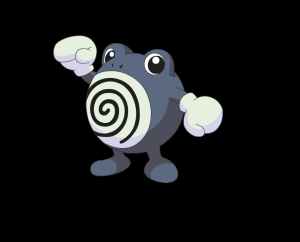 I guess it kind of looks like a frog?

Now many might be surprised that I didn’t put Poliwrath on here, since he is the evolution of Poliwhirl as well as much more efficient in combat. However this is another personal opinion, I never really liked Poliwrath. He’s just a bulkier meaner looking Poliwhirl and I guess I never quite understood that. At least Politoad looks like something I would expect from a family of tadpoles, but he’s not here either but whatever.

poliwhirl on the other hand has always been iconic, unique. Sort of cute and innocent looking but also strong and willing. He is a Pokemon that I’m sure many think up in their thought process when it comes to iconic original Pokemon. 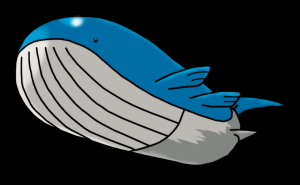 Back in the day I was excited to see that a whale Pokemon was finally going to appear in the Pokemon universe, it was an even better surprise that it evolved into an even cooler whale called Wailord.

As should be, Wailord is currently the biggest Pokemon known. Despite this though the Pokedex entries hint at the fact that this guy is more of a gentle giant that can still wreck house. again, there’s a lot of personals in this top six list, I have a Wailord on my current team in Omega Ruby named Ball (yeah I know, sometimes I suck at nicknaming). I found that not only was he a “killer” whale in battle, but he was also an easy one to level up.

Wailord is also a great HM slave, that might sound weird but I mean this in the best way possible. Teaching him moves like surf and strength are for some reason pretty worthwhile for him.

Now can we please see an even bigger whale called Mega Wailord?

Bullet Bill ain’t got crap on this thing!

Another great thing that generation three of Pokemon gave us was a shark Pokemon, finally! And it’s still rather cool that it actually evolves from a piranha.

Sharpedo is another Water/Dark typing but unlike Mega Gyarados I can totally see why here. Sharks are typically seen as terrifying to most people and some even have an oppressing phobia of them. Dark type makes sense because those Pokemon are usually seen looking evil or menacing, even though in actuality most of them are not. Also, making him shaped like a torpedo? super cool!

While his regular form looks impressively dangerous, his mega form seems to look both dangerous and merciless. It’s very cool how his yellow stripes expand to look like scar markings, and don’t even get us started on that saw blade looking nose.

What are your favorite water types? Please let us know!

Now I might be taking quite a haitus from making these Top 6’s, it wont be as long as last time though but it will be about half a week or so. We will be attending a Comic-Con convention this weekend and I will have some family matters to attend to. So until next time…