← GeekBeerz Podcast! (GBP) May Be Recorded On Fridays Weekly… [Quick Update]
The MCU Legacy: Let Us Prepare For The Endgame! →

Hello everyone! So I’ve painstakingly progressed further into this game enough to the point where I can come back and further talk about this fantastic game!

In this continuing post from the previous one, I’ll be discussing mini bosses, main bosses, and some other unique mechanics. I will also further explain why this game is not only harder than the other SoulsBorne games, it’s undoubtedly intended to be harder! 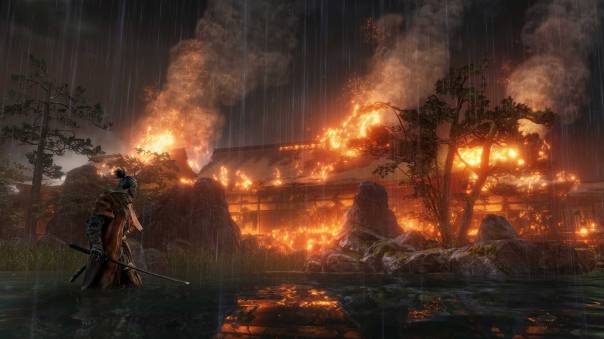 I Made A Whoopsie…

So on my last post I forgot to mention something further regarding the similarities to other From Software games, I feel like this was a big mistake so I’m going to bring it up here.

Back in Bloodborne, you were actually able to instantly regain lost health by continuing your advancements on the enemy that hurt you. This was not necessarily a necessary thing to do but it was a nice gimmick for the time. In Sekiro, it takes this similar premise and makes it the core mechanic of the game. While you don’t regain health from continuing your attacks, it still more beneficial for you to do so. If you do cower out and escape to heal the enemy will regain posture and possibly any successful death blows if you stray too far.

So yeah, I wanted to bring this up last time but totally forgot to include it.

Mini bosses, like in the prior games, are unique enemy types that will forever be gone upon defeating them. They typically carry important or rare items that act as your victory treasure upon killing them. In Sekiro, these mini bosses range from general warriors to ogre monsters. So far all of these mini bosses give you a prayer bead, an item which increases vitality when you collect four of them, as well as a good load points towards your skill points, points that get you unique skills for you attack system or prosthetic skills, and sometimes maybe even one more reward.

The mini bosses here are all very hard to beat. I ran into three of them in separate locations and had a hard time getting past all three of them. Fortunately I’ve managed to deal with all of them in order to proceed further but this was certainly my first “wall” to tackle in this game. Each have particular moves that are not defendable, meaning you will have to either side step away, jump or very much back off from these attacks. They also appear to all have two deathblow counters, meaning you’ll have to fight essentially two health bars that end in critical strikes.

There are certainly tricks and ways of making each fight a bit easier, but yes they are significantly harder than previous mini bosses from other SoulsBorne games.

Main bosses are even tougher here. They mostly present themselves in a similar way to mini bosses but some get the classic cinematic presentation they deserve! And as far as one of them showed, that being Lady Butterfly, they will have second phases to deal with.

Lady Butterfly is as tough as a grandma can get, a fight that is reminiscent of the hunter fights in Bloodborne. She is a highly skilled and quick physical fighter that will eventually mess with your head by creating illusions in her second phase. She is tough and I haven’t quite beaten her yet, but nevertheless she is a fantastic boss fight!

The other boss I’ve done was Gyoubu, a warrior samurai riding on a horse that is so much more than it seems. This is absolutely the first boss fight that everyone should do before any others. Not only is this fight generally straight forward, but you can also test out some tricks to make the fight more tolerable. I personally found the firecracker prosthetic tool to be my saving grace.

So I can say from just these first boss battles that this game will likely have the most interesting boss battles that From Software has ever conceived! They are hard and challenging, but they are also inspired and cool to see.

This game has skill trees, which is one of the most extreme changes this game offers over other SoulsBorne titles. There is a skill tree for your Shinobi abilities and Prosthetic abilities as previously mentioned, where you use skill points to buy them.  There is also a tree for prosthetic upgrades, this is where you have to collect materials throughout the world alongside money to purchase much better versions of your previous prosthetic tools (or at least alternative versions with perks).

These are certainly interesting and I’m always excited to gain new prosthetic tools whether new or alternative.

This Game Is Hard!

All in all, I really like this game and I am content to continue on with it. But I must also admit that this is easily the hardest game made from this company by far! No contest! It honestly feels like this game was designed to punish Souls players for learning past knowledge on how these games “work” and this game quickly shows you that it works very, very differently.

For a minor example, you have to hold your posture guard to REGAIN posture faster. This is wildly opposite of the shield system from Dark Souls where dropping your shield gains stamina faster. Any new players getting into to this game with this shield knowledge will certainly have a bad time!

So yeah, this game is the hardest easily. Again, no contest!

Thanks for reading if you did! We’ll be back next week with hopefully more delightful posts, hopefully an actual launch of one of the podcasts but nothing is certain as of yet!

← GeekBeerz Podcast! (GBP) May Be Recorded On Fridays Weekly… [Quick Update]
The MCU Legacy: Let Us Prepare For The Endgame! →