GBHorror2017: These Things Are Scary, No Matter What!

Welcome to the second to last post for GBHorror2017! We are nearly there! For this post, we will be looking at a list of the scariest things that will, to some degree, terrify us no matter how or what way. Will the list may seem subjective and precise, I’m hoping that there is at least one thing on this list that someone can agree with. Anyways, I hope you enjoy the list…

Children are usually fun and innocent young individuals who represent our future and legacy. But within the confines of a horrifying situation, they can be the most terrifying thing involved. There is a reason why children are usually the emphasis of many horror tales such as Children of the Corn or even Exorcist with a child possessed, but it’s hard to really gain a direct reason. One reason that I would consider is the fact that kids, during particular ages, are very creative and imaginative. If they can use these youthful skills to amplify their creepy natures and influence, there’s no denying the success they get with it.

Hallways come in many shapes and sizes, they can also have access to either many rooms or just simply connect from one end to the next, but why can they also be horrifying? Well a hallway in the dark or particular lighting certainly sets the mood of dread, there could also be a fear of something at the end of the hallway waiting for you. Hallways which access ,many rooms can be scary because they invite the potential of either many enemies waiting behind each door, or a single threat hiding in one room and leaving you to discover said room the hard way. Whatever the reason, they are just plain spooky to us. 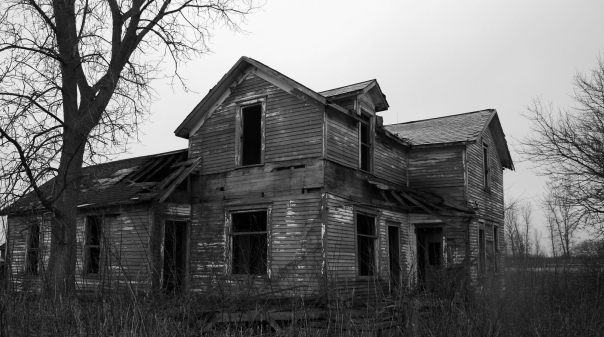 With every newly built building, there is always an abandoned one lying in silence… sort of. These abandoned sites are notorious spots for teens to hide out and vandals to spray paint obscene images and vulgar notions, but they can also be the site of much more. The obvious possibility is the old location is haunted, which really depends on the history of the place. There is also the possibility of a killer in hiding or the place collapsing on top of you, who was unfortunately there at the right time. But there is also just something unnerving and freaky about, in cases I’ve witnessed, absolute silence, as if even the whole world has abandoned this place, that really keeps us on edge.

From my own experience, people are either afraid of the jump scare itself, or the build up to an obvious jump scare waiting to happen. If you don’t quite know what a jump scare is, it’s when a sudden or abrupt object, usually a scary face, appears or rushes at the screen to absolutely catch you off guard. They are also usually complimented with a loud noise or scream. Now even if you are a brave soul who believes you can best these scares, I’m almost positive that at least one will get you.

There are many classic horror films out there that truly understand the importance of these two factors, games as well. Our minds and expectations of things in the world tell us that the standard or basic is the okay and normal, but whenever something is off it really captures our attention in an uncomfortable way. When a monster, like a zombie for example, has shreds of flesh and distorted limbs we become afraid or uneasy from the sight simply because our minds say that it’s not normal or acceptable. The same can be said for the uncanny valley, if something is humanoid or realistic but with an unlikely attribute that seems very off for that thing it will upset us. If not upset then terrify us, which is why it’s on this list.

Thank you for reading, I can’t believe it has already come to this! Check back tomorrow for the FINAL post! Again, it’ll be at 1 pm!

Posted on October 30, 2017, in Uncategorized. Bookmark the permalink. Leave a comment.